View source
watch 01:25
Jurassic World: Dominion Dominates Fandom Wikis - The Loop
Do you like this video?
Play Sound
For other uses, see Ragnarok.

Thor: Ragnarok is a 2017 superhero film based on the Marvel Comics superhero Thor. It is a sequel to Thor, Thor: The Dark World, and Avengers: Age of Ultron and the seventeenth installment in the Marvel Cinematic Universe, while also being the fifth installment of Phase Three.

In Marvel Studios' Thor: Ragnarok, Thor is imprisoned on the other side of the universe without his mighty hammer and finds himself in a race against time to get back to Asgard to stop Ragnarök – the destruction of his homeworld and the end of Asgardian civilization – at the hands of an all-powerful new threat, the ruthless Hela. But first he must survive a deadly gladatorial contest that pits him against his former ally and fellow Avenger – the Incredible Hulk![4]

On October 2, 2015, Taika Waititi signed to direct the movie. Other candidates at the direction of the movie were Ruben Fleischer, Rob Letterman and Rawson Marshall Thurber.[20]

On February 25, 2016, Stellan Skarsgård confirmed that he will not have reprised the role of Dr. Erik Selvig in the movie.[21] On April 11 Natalie Portman was also confirmed to not come back for the sequel, while Tessa Thompson joined the cast as Thor's new romantic interest.[22]

On May 20, Marvel.com reported that Karl Urban and Jeff Goldblum have joined the cast. Cate Blanchett and Tessa Thompson were confirmed to be playing the major villain Hela and the hero Valkyrie respectively, while Anthony Hopkins and Idris Elba reprised their previous roles.[5]

Principal photography started on July 4, 2016, in Queensland, Australia. The working title for the film is "Creature Report".[23]

On July 23, 2016, at San Diego Comic-Con, Hulk's gladiator armor was revealed, along with the first piece of footage, showing Thor's and Hulk's whereabouts. 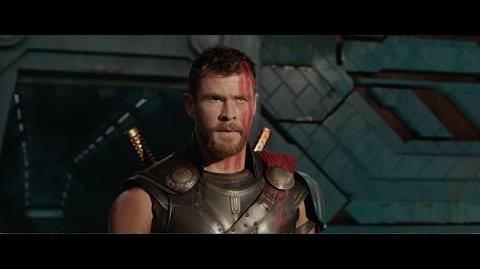