Thor battles to save the Earth and the Nine Realms from an unknown, shadowy enemy who predates the universe itself. However, an ancient race led by Malekith, who is out for revenge, intends to descend the universe into darkness. Faced by an enemy that even Odin and Asgard cannot overcome, Thor must set off in a dangerous and personal journey, which will re-unite him with Jane Foster and that will force him to make the ultimate sacrifice.[1]

Eons ago, Bor, father of Odin, clashed with the Dark Elf Malekith, who sought to destroy the universe using a weapon known as the Aether. After conquering Malekith's forces, including enhanced warriors called the Kursed, on their home world of Svartalfheim, Bor safeguards the Aether within a stone column. Unbeknownst to him, Malekith, his lieutenant Algrim, and a handful of Dark Elves escape into suspended animation.

In present-day Asgard, Loki stands imprisoned for his war crimes on Earth. Meanwhile, Thor, alongside warriors Fandral, Volstagg and Sif repel marauders on Vanaheim, home of their comrade Hogun; it is the final battle in a war to pacify the Nine Realms following the reconstruction of the Bifröst. In London, Jane Foster's intern, Darcy Lewis, takes Jane to an abandoned factory where the laws of physics have begun behaving oddly and objects disappear into thin air. Separating from the group, Jane is teleported to another world, where she is infected by the Aether.

The Asgardians learn that a rare alignment of the Nine Realms, referred to as the Convergence, is imminent; as the event approaches, portals linking the worlds appear at random. Heimdall alerts Thor of Jane's recent disappearance, leading Thor to bring her to Asgard. There, Asgardian doctors state that they cannot remove the Aether, due to its ability to discharge powerful protective energy blasts when it is threatened. Odin warns Thor that the infection will kill Jane given enough time, and that the Aether's return heralds a catastrophic prophecy.

Malekith, awakened by the Aether's release, turns Algrim into a Kursed and attacks Asgard. During the battle between the Asgardians and the Dark Elves, Malekith and Algrim search for Foster. When they fail to capture her, they escape, killing Thor's mother, Frigga. Despite Odin's orders not to leave Asgard, Thor reluctantly teams up with Loki, who knows a secret portal to Malekith's world, where they will bring Jane in order to lure and confront Malekith and keep him from Asgard.  In return, Thor promises Loki that he can have his revenge on Malekith for killing their mother. With the Volstagg and Sif stalling Asgardian soldiers and Fandral assisting their escape, Thor and Loki commandeer a Dark Elf spaceship and escape to Svartalfheim with Jane.

Thor, Loki and Foster confront Malekith and his forces, where Loki tricks Malekith into drawing the Aether out of her. However, Thor's attempt to destroy the substance fails, and the Aether-empowered Malekith leaves with his ship. Loki appears to be fatally wounded while protecting Jane. Thor, cradling Loki, promises to tell their father of his sacrifice. Loki replies, "I didn't do it for him" before evidently dying in Thor's arms. Thor and Jane reunite with Selvig, Darcy and Ian, Darcy's intern, in London after discovering another portal in a nearby cave. They learn that Malekith plans to unleash the Aether to destroy the universe, and that he will do this in Greenwich, the center of the Convergence. Thor battles Malekith, but a portal separates them, leaving Malekith unopposed. Thor comes back in time to help Jane, Selvig, Darcy and Ian use their scientific equipment to transport Malekith to Svartalfheim, killing him before he can destroy the universe.

Thor returns to Asgard, where he declines Odin's offer to take the throne and tells Odin of Loki's sacrifice. As he leaves, Odin's form shapeshifts to that of a grinning Loki.

In a mid-credits scene, Volstagg and Sif visit the Collector and entrust to his care the Aether, commenting that, with the Tesseract already in Asgard, having two Infinity Stones so close together would be dangerous. As they leave, the Collector remarks, "One down, five to go." In a post-credits scene, Jane and Thor reunite on Earth, while somewhere in London a Frost monster accidentally transported to Earth from Jotunheim during the final battle continues to run amok. 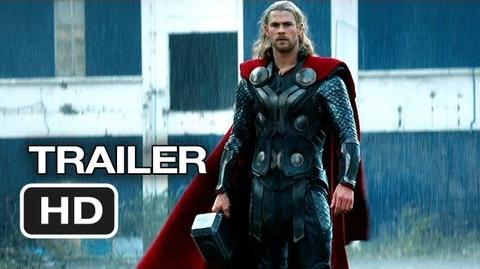