This article is a stub. You can help Marvel Cinematic Database by expanding it.

Yggdrasil (also known as the Tree of the World, the Guardian of Wisdom and the Guardian of Fate) was a tree-like network of galactic superclusters connecting the Nine Realms of the Marvel Cinematic Universe. Through Yggdrasil, travel between the different worlds was possible, with the most common example of this being the Bifrost Bridge of Asgard.[1]

According to Odin, the Nine Realms travel within Yggdrasil much the way orbiting Midgard much the way the planets of the Solar System orbit the sun. When the planets align perfectly, the Convergence occurs.[2]

A mural depiction of Yggdrasil was located in a church in Tønsberg, Norway, which served as the location where the Tesseract was hidden up until it was taken by the Red Skull in 1942.[3]

Another shot of Yggdrasil. 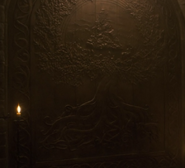 The mural depiction of Yggdrasil in Tønsberg.
Add a photo to this gallery

Retrieved from "https://marvelcinematicdatabase.fandom.com/wiki/Yggdrasil?oldid=8892"
Community content is available under CC-BY-SA unless otherwise noted.